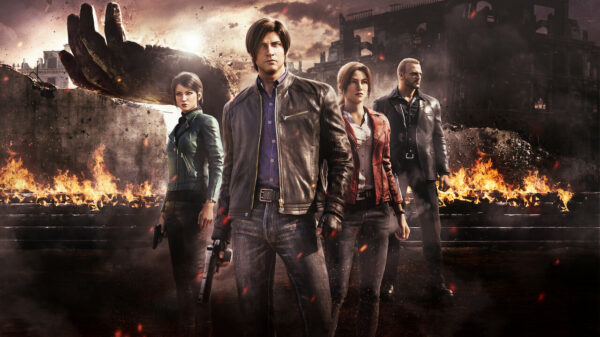 Resident Evil: Infinite Darkness in the newest anime installment based on the hit video game franchise, shedding light on a previously unseen era in Leon S. Kennedy and Claire Redfield’s lives. Free from the horrors of Raccoon City, the heroes turn their attention to the threat of bio-organic weapons on a global scale.

Since he has saved President Graham’s daughter, Leon has become a legend in the Secret Service. He and three other agents, Patrick, Shen Mei, and Jason, are assigned to find the person who hacked into a remote server to steal sensitive military secrets. Suddenly, the lights go out at the White House. Deeply alarmed, the agents move the President to a secured bunker and discover that zombies have been let loose in the White House. Leon arrives right on time, and working together with the other agents, neutralizes the threat.

Defense Secretary Wilson is behind the attack on the White House. He releases the zombies in the presidential house with Jason’s help. A classic warmonger, Wilson knows that China is America’s greatest competitor in the modern world and believes that a war between the two nations is inevitable.

Unfortunately, neither Netflix nor Capcom have confirmed that Infinite Darkness is getting a second season. Since the series does conclude its story in such a definitive fashion, it’s very possible that this is just meant to be a one-and-done installment on Netflix, the Tricell reveal added to the finale as a fun easter egg and nothing more. We’ll of course keep you informed if and when Infinite Darkness season 2 is announced.